Somewhere in the early 19th century, the Suurupi upper lighthouse used a curved prism lantern, invented by French physicist Jean Fresnel, to illuminate oil lamp lights horizontally with respect to land and sea. The light of such a lantern shone much further than before.

By now we also have information on reconstruction details, including that in 1812 the limestone Suurupi lighthouse was fitted with a lantern room with a catoptric light composed of 15 lamps.
In 1812, along with the introduction of oil lamps, the Suurupi lighthouse got itself a glazed cylindrical lantern space on top of the limestone section which remained so until September 1944. Then German troops left mainland Estonia, the limestone lighthouse was burnt down in Suurupi and the lighthouse watchman’s house near it was blown up. However, apparently one of the blasters flew himself/herself to the kingdom of heaven (or to hell?).

The steel lantern room of this rear beacon sits on a stone truncated cone four storeys high. The height of the stone part of the lighthouse is 16.4 metres, the diameter at the base is 10 metres and at the upper part 9 metres. The rear occulting light of the leading light beacons can be seen from a distance of 15/12 nautical miles. The lantern room of the lighthouse has also been reconstructed many times over the years. 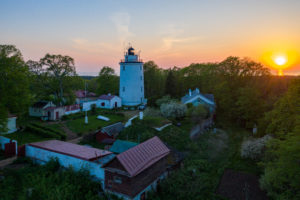